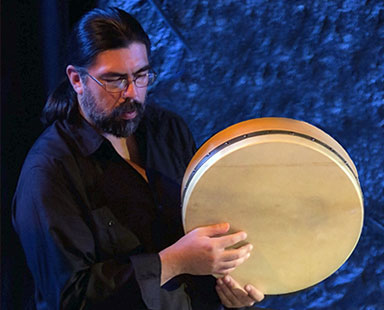 Octavio Beltrán studied composition at the Conservatorio de las Rosas in Morelia (Mexico), ethnomusicology at the National School of Music in Mexico City DF, and holds a master degree on Musicology, Music Education, and Early Music Performance from the Universitat Autònoma de Barcelona. He has conducted rigorous organological research on pre-Hispanic musical instruments. This work can be seen in the documentary “Los sonidos del museo” (CMYC, 2008). Octavio is also specialized in European historical percussion instruments. He has studied with Pedro Estevan at the ESMUC (Escola Superior de Música de Catalunya) and with Dr. Mauricio Molina at the Conservatory of Girona. His interest in the performance of medieval music led him also to attend the International Course on Medieval Music Performance of Besalú, the Cerverí de Girona workshops of the Conservatory of Girona, and the Cantigas de Santa Maria course of the Festival de Música Antiga dels pirineus. He is a member of the medieval music ensemble Mirall de trobar, and of the Baroque and novo-Hispanic music group Tente in the Air. He has also performed with the Medieval Academy of the FEMAP.