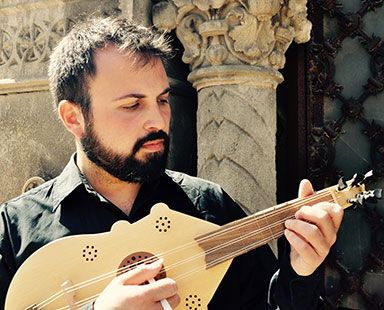 Martí Beltrán is an early music performer, musicologist, and art historian. He studied early plucked string instruments, organology, and musical iconography at the Escola Superior de Música de Catalunya (ESMUC), where he obtained a bachelor degree in Musicology in 2010. His interest in medieval music prompted him to participate in seminars on Ars nova and Ars subtilior conducted by Pedro Memelsdorff at the ESMUC; to work on the performance of Plainchant with Juan Carlos Asensio and Marcel Pérès; and to attend the courses dedicated to 12th- and 13th-century music performance with Dr. Mauricio Molina at the Conservatory of Girona. Martí also holds a master’s degree in Artistic Heritage from the Universitat Autònoma of Barcelona (2011). As an art historian he participates in the compilation of the The Spanish Romanesque Encyclopaedia, and has received a scholarship from the Andrew W. Mellon Foundation to study the Portico de la Gloria of the Cathedral of Santiago of Compostela. Martí is also a professor at musicology program of the ESMUC (Escola Superior de Música de Catalunya), and a member of the ensembles Magister Petrus, Razos de trobar and Ars memoriae.