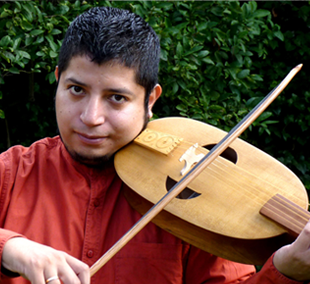 Alejandro Tonatiuh Hernández studied modern violin at the Conservatorio Nacional de México, historical violins at the Escola Superior de Música de Catalunya (Barcelona) and musicology at the Universidad Autónoma de Barcelona. His interest in medieval repertoires and bowed string instruments from this period prompted him to form and direct in Mexico the medieval music ensemble Musica Enquiriadis, and to cooperate with the groups Sendebar and Magister Petrus (USA-Spain). Alejandro has also developed solo programs recreating the practice of the minstrels who sang and accompanied themselves with the vielle. This is in response to his interest in the reconstruction of the medieval song repertoire as recorded in many historical sources. For this type of reconstruction he received an early music award in 2001 from the Conservatory of Mexico. He has participated in seminars on ars nova and ars subtilior directed by Pedro Memelsdorff at the ESMUC and has studied 12th- and 13th-century performance practice with Dr. Mauricio Molina in the Conservatory of Girona. In 2018 released his solo CD Tempus viellatorum through Enchiriadis.