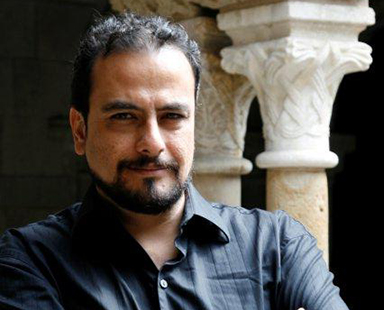 Dr. Mauricio Molina is a historical musicologist and early music performer dedicated to the reconstruction of music composed from the 11th to the 13th centuries. He holds a Historical Performance degree from The Mannes College of Music (New York) and a musicology Ph. D. degree from the City University of New York Graduate Center. He teaches medieval music theory, organology, iconography and performance practice as a visiting professor at the Centre International de Musiques Médiévales and the Université Paul Valéry of Montpellier. Dr, Molina is also professor of medieval Islamic Culture and Art, and musical anthropology at the American university consortium IES Abroad Barcelona. He has been professor of Medieval Music at the University of Bridgeport (Connecticut, USA), of Medieval Music at the conservatory of Girona (Catalonia), and lecturer at the Master of Historical Performance of the ESMUC (Escola Superior de Música de Catalunya) and Musicology at the Universitat Autònoma of Barcelona.

Dr. Molina is the author of Frame Drums in the Medieval Iberian Peninsula (Reichenberger 2010), a book that received the Nicholas Besseraboff Prize of the American Musical Instrument Society as the most distinguished book-length work on organology of 2010. His upcoming book “La canción monofónica secular y religiosa en el Occidente medieval (850-1200)” will be published by Dairea Ediciones in 2020. Mauricio is also the director of the medieval music ensembles Magister Petrus and Ars memorie.