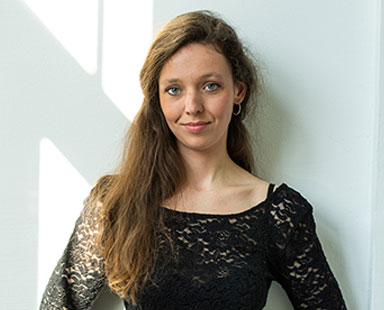 The Slovenian mezzosoprano Jasmina Črnčič received a bachelors degree in classical singing pedagogy from the University of Music and Performing Arts Graz (Austria) in 2017 and worked as a vocal technique pedagogue for the Carmina Slovenica ensemble between the years 2015 and 2019. Her interest in medieval music brought her to the Medieval Music Course of Besalú where for three years she studied performance practice with Dr. Mauricio Molina, liturgical chant with Dr. Katarina Livljanić, Marcel Pérès, and Juan Carlos Asensio, and medieval singing with Benjamin Bagby and José Pizarro. She continued her specialisation in medieval music and obtained a masters’ degree in medieval music performance from the Folkwang University of the Arts, Essen (Germany) where she studied with Benjamin Bagby, Dr. Stefan Klöckner and Dominik Schneider. She performs as a soloist in the Slovenian vocal ensembles Carmina Slovenica and Kebataola under the artistic direction of Karmina Šilec. Internationally she performs with medieval music ensembles like Magister Petrus, Per-Sonat, and Sequentia.