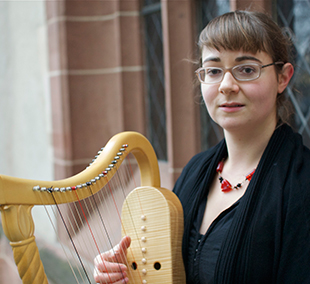 Claire Piganiol is a harp player who specializes in repertoires ranging from the Middle Ages to the18th century. She studied recorder and modern harp in the Conservatoire de la Vallée de Chevreuse near Paris (France). During this time she also discovered historical harps and decided to focus on their study. Her fascination with these instruments led her to conduct specialized studies in Milan, Toulouse, and Basel, where she obtained a Master in early harps in 2012. She also obtained a Master degree in harp and recorder at the Musikhochschule Trossingen in a program — directed by Kees Boeke — dedicated to the study of Medieval and Renaissance music. Claire also studied history and musicology in Universités Panthéon-Sorbonne and Paris-Sorbonne where she conducted research on iconography and the reconstruction of playing techniques for her instruments. She collaborates with different early music ensembles both in France and abroad, such as ensembles Roselis, Tetraktys, Gilles Binchois, le Parlement de Musique, and teaches historical harps at the Conservatoire de Besançon in France